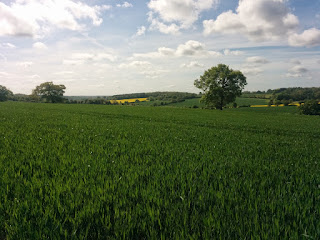 The idea for Le Grande Ultra Tour came out of a post to the Ultra Running Community facebook site. I'm running the Chiltern Way 200k race later in the year and looking at the route online I'd noticed that the top section looked a bit like a cat's head - or many other things according to some of the comments on the site.

I doubt I'll get to recce the full route before the race but the 'cat's head' was close to home, about 40 miles and could be made into a circular route with only a small deviation from the Chiltern Way.
The name came from the idea that the route circumnavigated Luton and I figured the idea of looking at Luton all day was at least as challenging as doing the UTMB race.

I'd posted it as an event on the Social Ultra website but with the race calendar getting pretty busy I'd never really expected much response.  In the end 3 of us ended up doing - Scott and Chris were friends outside of Social Ultra as well as being members of the group 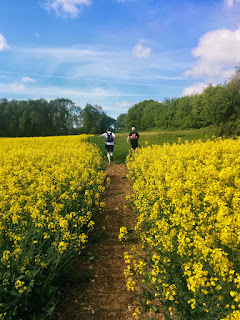 Aims
Although I'm not using a structured training programme at the minute I do try and consciously set myself aims for some of my training runs. Le Grande Tour was going to be my last long run before the South Downs Way 100 so my aims were:


I picked Chris up and we met Scott at the Lilley Arms at 9am. It didn't get off to an auspicious start as I left my phone in the car and ended up turning round almost straight away.

The Chiltern Way is fairly well signposted in this part of the world although at this time of year signs are easily covered by vegetation. I'd run the first mile or so of the route which was lucky as we nearly ran past the first turn off in Lilley. 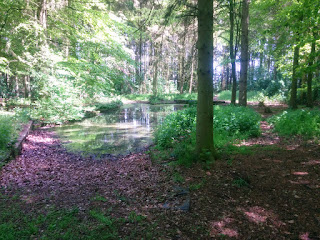 Although the route crosses some major roads and passes built up areas you very rarely feel like you are in an urban environment.  The route wends it's way through the rolling countryside - if you'd never run in this area you might be surprised how hilly this area is.  We were soon off the stretch I knew which made the navigation more interesting. We made one minor error when a finger post seemed to point across a field. We fairly quickly recognised our error and got back on track.

I don't normally run with other people and it probably helped me to slow down. Chris had run 70 miles a few weeks before and was still in recovery mode. The rape seed growing in many of the fields made life interesting and after cutting through one field we looked like we'd done a colour run.

We hit 'civilisation' again at Harpenden and then had the delights of crossing a major junction under the M1.  Pretty soon it was back to the countryside though and until we hit Dunstable Downs Luton was lost to us.

We stopped at the Downs visitor centre for a coffee and cake (highly recommended if you are ever in the area) and from there on in I knew the route back to Lilley.  There's a major link road being built between the M1 and the A5 which crosses the route and will be interesting when I'm back there for the race later in the year. 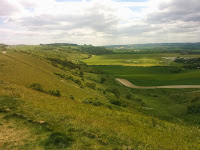 Overall it was a great day out.  Superb weather, fantastic countryside and very very few glimpses of Luton.  I managed to hit my main aims although I got lazy with my feeding near the end.  Legs felt great at the finish but I was running low on energy.

I'll quite probably run this again next year after some interest on the Social Ultra site.  It's just difficult finding a space in the ultra calendar these days.